Adoptee Nephtalie Moore was still in Haiti when the country’s devastating earthquake of 2010 hit. Her older sister, Martine, and soon-to-be adoptive family were in South Carolina. One year later, Martine and Nephtalie were reunited — solidifying a bond that today remains as strong as ever. Rebecca Moore was the first one in her family to wake to the news on January 12, 2010. A 7.0 magnitude earthquake had struck close to Haiti’s capital of Port-au-Prince. Hundreds of thousands were feared dead. Buildings were leveled and millions of families were now homeless. Haiti, already the poorest country in the western hemisphere, now faced even more devastation and uncertainty. Millions in the United States and around the world clung to their televisions and computers, awaiting updates. People sent prayers, churches and communities gathered for vigils, and local relief agencies prepared to send aid to our distressed neighbors in the south.

But for the Moore family of South Carolina, the catastrophic event hit even closer to home. In the midst of the devastation, at a Holt-supported care center near Port-au-Prince, the Moore family’s soon-to-be adopted daughter, Nephtalie, waited to come home. Her biological sister, Martine, was already home with the Moores. Martine (center) with her friends in Haiti.

“I was scared for the orphanage,” Martine says, “and also for my [birth] parents” who lived in the Saint-Marc region of Haiti.

In the midst of the uncertainty, Rebecca tried to console her anxious daughter as they waited for updates — updates that came slowly due to Haiti’s failed electrical system.

“Holt sent out communications saying the children at their care center were safe,” Rebecca said. “So at least I knew that.”

And soon, the Moore family learned that Martine’s biological family was unharmed in the earthquake. “After that, Martine felt more secure,” Rebecca says.

Nephtalie was safe, and Martine’s birth parents and friends were alive. For however brief a time, Rebecca felt relief. Then, as quickly as the calm came, it went, as Haiti’s supreme court flashed across the television screen. The highest court in the Haitian legal system — home to thousands of official adoption documents — had been reduced to rubble. At that moment, a terrible realization struck Rebecca:

In 2008, Rebecca and Jeff Moore were already two years into the process of adopting then 10-year-old Martine from Haiti when they got the call that Martine’s younger sister, Nephtalie, would also need an adoptive family. The Moores, who had already adopted a daughter from Romania and a son from India, joyfully agreed to make Nephtalie a part of their family as well. Unfortunately, because they were already well into Martine’s adoption process, Nephtalie would be unable to return to the United States with the Moores when they traveled to Haiti for Martine.

When that day came in 2008, the Moore family was ecstatic to finally have Martine with them, but heartbroken to leave Nephtalie behind. “Nephtalie didn’t understand why we were taking her sister, but not her,” Rebecca says. “She was very upset.” The only thing the Moore family could do was to console their young daughter and promise to return for her soon. After many tears, the Moores left Haiti with Martine and returned to the United States, waiting and preparing for the day when sweet Nephtalie would join their family, and sisters could reunite.

But on January 12, 2010, the family’s promise to Nephtalie seemed destined to be broken. Their adoption paperwork was now buried several feet under the rubble of Haiti’s supreme court. Many of the judges who granted adoptions were either seriously injured or dead, and fears of post-earthquake child trafficking in Haiti ran rampant. “All of our records were destroyed,” Rebecca says. “We were two years and 9 months into an already complicated adoption process, and things just got messier. It was all really hard to deal with.” One night, Martine recalls, the gravity of the situation became too much for Rebecca. “I went to the living room and found my mom on the couch,” Martine says. “She was crying and sad thinking that my sister wouldn’t be home as soon as we thought. And I tried to comfort her.”

With Martine’s words of comfort buoying her spirits, Rebecca, a former Holt employee and staunch advocate for orphaned children, dried her tears and got to work. She first contacted the media, and then senators, making “anyone who would listen” aware that her daughter, and many other children already approved for adoption, were in Haiti and needed to be in the United States with their adoptive families. “I worked really hard on legislation,” Rebecca says. “I was up until 3 a.m. sending emails and calling people. At first, I was discouraged and thought nothing was going to happen.”

But something did happen, “a miracle,” Martine says. 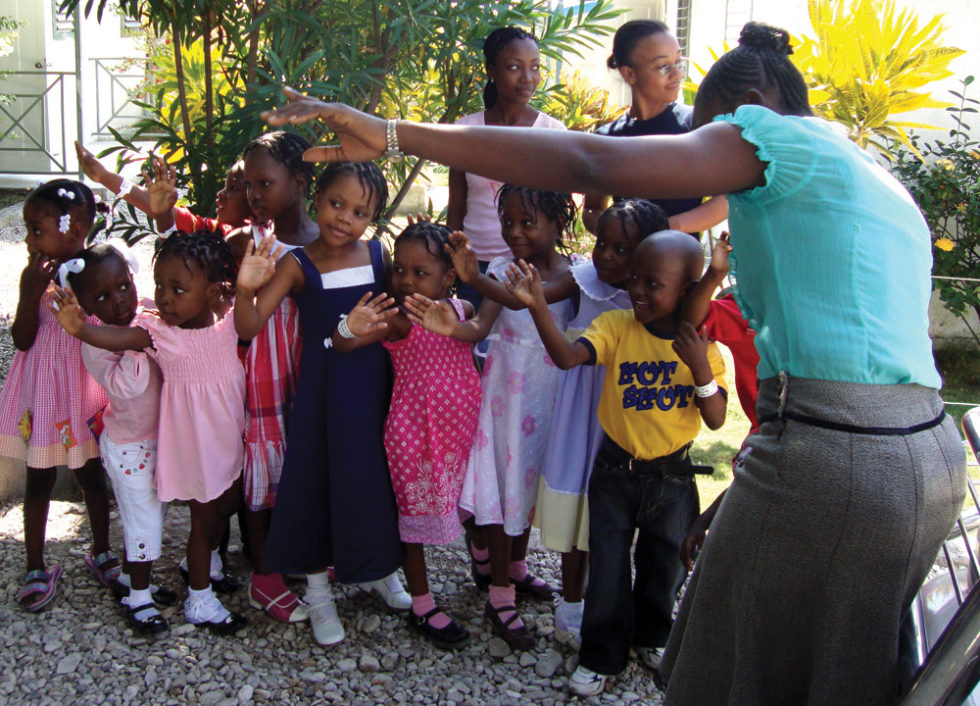 Nephtalie (first on the left) and 11 other children say goodbye to Haiti and prepare to join their adoptive families in the United States.

A little less than a month after the earthquake, Rebecca got the news she had been praying for. Children in Haiti, already matched with adoptive families prior to the earthquake, would receive special parole visas that would allow them to leave the devastated country and join their adoptive families in the United States. Nephtalie, along with 20 other children in Holt’s former care center, would be coming home.

The first week of February, the Moore family packed their bags and left for Miami, where they would reunite with Nephtalie.

But when the Moore family walked into “His House,” the residential care center where the children were staying, Nephtalie was nowhere to be found.  Martine, who fortunately still spoke Creole, was able to ask the other children about the location of her sister. “Oh, Nephtalie’s around here somewhere,” they all nonchalantly said. Rebecca shares this story with a laugh, saying it was this moment that gave them the perfect glimpse into their new daughter’s personality — a personality Rebecca affectionately calls “very active.”

Finally, though, the family located Nephtalie. Nephtalie looked at Martine, and cautiously stepped a little closer. Then, Martine stepped closer to her sister. And Nephtalie spoke:

“You came. You finally came.” Nephtalie and Martine see each other for the first time in over two years. “You came,” Nephtalie said when she saw Martine.

Although only 4 at the time, Nephtalie had remembered the promise her family had made to her two years prior.

On February 3, 2011, Nephtalie was reunited with her sister, and forever joined with her family.

In the months that followed the family’s reunion with Nephtalie, Rebecca continued to be astonished at all that Nephtalie remembered about them. “When I would put sunscreen on her, she would say ‘this is how you smelled in Haiti,’” Rebecca says. “Two years later, she remembered. Her memory was incredible.”

Rebecca, however, wishes some of her daughter’s memories of Haiti weren’t so easily recalled — her memories of the earthquake.

“She was scared when things would shake. A car would go by and she would yell, ‘It’s an earthquake! It’s an earthquake!’” Nephtalie would also talk about water being everywhere — pipes breaking, Rebecca assumes. And she remembers the screaming, the screams of her caregivers during the initial tremor and the aftershocks. “Everyone was so scared,” Rebecca says. “Nephtalie says they all slept outside.”

Nephtalie was able to cope with her trauma as well as the transition home thanks to her new family – her very large new family of eight. Nephtalie attached right away to the Moores’ 10-year-old biological daughter, Gabrielle. “She was actually very active and open with everyone,” Rebecca says. “She jumped into playing and interacting with her siblings.” But she always stayed close to Martine, “the one she fully trusts,” Rebecca says.

Today, Martine is 18 and is currently working in France as an au pair. “I cook the meals and drive them to their activities,” Martine says. “On my days off, I sightsee.” After her year in France concludes, Martine will return to South Carolina for college, hoping to receive a degree in speech therapy. “I just know I want to work with kids who are in need of help,” Martine says. Two years ago, Martine also returned to Haiti, a journey she calls “the highlight of my life.”  Martine says she recognized her caregivers right away and loved reconnecting with her past. Nephtalie, now 13 and preferring to be called ‘Talie’, is currently enjoying junior high life, and according to her mom is “still as active as ever.” Up until last year she was a competitive gymnast, but has since become interested in cheerleading. “She excels at every sport,” Rebecca says. “Any physical activity she has done, she has excelled at.” Like the rest of her family, Talie also loves to travel. Both Martine and Talie traveled to India in 2012 to volunteer at Holt’s partner agency, VCT. And Nephtalie traveled with Rebecca and Jeff  to the Philippines when the Moores adopted two brothers from the country two years ago.

“We saw Martine and Nephtalie’s bond and wanted to do our part to keep another sibling group together,” Rebecca says.

Though excited about the idea of travel in general, Talie, unlike her sister, has no interest in returning to Haiti — “at least not right now,” Rebecca says. “The girls are very different in their opinion of Haiti. Martine loves Haiti, speaks the language, goes to a Haitian church, and has Haitian friends. Talie is more hesitant. She has kind of divorced herself from that relationship.” Still, Rebecca wonders if a day will come when Nephtalie’s opinion of her birth country will change. “Sometimes as children age, they become more comfortable revisiting their past. We’ll see.” But even if Talie decides not to return to Haiti, Rebecca says she’ll always have that connection through her sister. “Their bond remains so strong.”

And Martine agrees. “Nephtalie and I are very close to each other. She’s pretty cool,” Martine says. “We talk a lot, sometimes about our life in Haiti, but not often.”

And as for the earthquake, Martine says she’ll only talk about it if someone asks.

“And then I tell them Nephtalie’s story,” Martine says. “The story of how she came to be with us. I get to say it was a tragedy, yes, but also a miracle.”

SO happy to see this story! We sponsored Nephtalie while she was still in Haiti. She was our third child to sponsor through Holt. I remember the immense relief of knowing that she was able to join her family so quickly after the earthquake. God bless you all!

We remember the Moore family! We were there with them in Miami awaiting the arrival of our 2-year-old, Manel, who shared a house with Nephtalie at Holt Fontana. He spoke about her for a couple of weeks after coming home with us to Michigan. He even called his Liberian cousin “Nephtalie” for awhile! This story brings back so many memories and feelings for Scott and I. Thank you for sharing. By the way, Manel is 9 now and is very outgoing and brings joy wherever he goes. His passion is playing hockey!

My son was part of that miracle flight from Holt’s facility in Haiti to Miami. What a great experience for us all! Manel and our family talked about Nephtalie often in our first few months together. She was a wonderful little girl and she found awesome family!!!!

I’m so glad to hear that she is doing great. Manel says Hi!!!

I’m so happy to see Naphtalie is here with her family and reunited with her sister. I remember her from November 2008, when I picked up , my daughter Renée (Bertine). They were friends and lived in the same dorm. Loved reading this.

Holt Secures Grants to Reunite Children With Families in Cambodia

Why One Adoptive Mom Volunteers at Winter Jam

Get to know Nia-Keny Allia