Four government officials from Vietnam visit Holt families and staff in Eugene as part of a final selection process to begin adoptions from Vietnam to the U.S. The two selected agencies will participate in a pilot adoption program for children with special needs.

Sixteen years ago, Hai and Valerie Nguyen traveled to Vietnam to bring home their twin 2-year-old daughters, Mai and Ly. This month, Mai and Ly will turn 18. Both girls love math and science, can solve a Rubik’s Cube in 46 seconds — blindfolded — and have big ambitions to be the first twins in space! They also speak fluent Vietnamese, an amazing feat considering they grew up in Eugene, Oregon and have only traveled to Vietnam twice.

Last Sunday, Mai and Ly had a unique opportunity to practice their Vietnamese when the Nguyen family welcomed a special delegation of officials from Vietnam to their home. Composed of four government officials, including Mr. Nguyen Van Binh, director of the Central Adoption Authority in Vietnam, the delegation traveled to Holt’s headquarters in Eugene as part of a final selection process for accreditation to facilitate adoption from Vietnam. While in the U.S., the officials will observe the operations and organizational structure of three agencies, and select two to participate in a pilot program for special needs adoption — placing the first children to the U.S since Vietnam and the U.S. declared a moratorium on international adoption to the U.S in 2008. Holt was excited and honored to host the delegation, and to be considered for this special adoption program.

Over the weekend, our staff was also delighted to introduce the delegates to local Holt families in Oregon who have adopted from Vietnam. Although the adoptions of children from Vietnam to the U.S have periodically been shut down through the years, Holt has maintained a consistent presence in Vietnam since 1989. Through the years, Holt has introduced foster care as an alternative care model for orphaned and abandoned children, and developed family strengthening programs to give struggling parents the tools and resources to care for their children — ultimately preventing abandonment, and keeping children with their birth families. In the years when Vietnam resumed adoptions, Holt also helped to find loving adoptive families for hundreds of children — including Mai and Ly and their two little brothers, Trung and Thanh.

On Sunday morning, the officials sat around the Nguyen family’s coffee table — flipping through photo albums and learning about the children’s lives in the U.S. Valerie — a professional educator — home-schools her children, and the walls of the Nguyen home are covered in maps and educational guides. As the Eugene school district doesn’t offer a Vietnamese immersion program, Hai and Valerie created one in their own home. It helps that Hai grew up in southern Vietnam and only speaks Vietnamese to his children. The delegates were impressed that Mai and Ly are so fluent, and they laughed with joy when Hai shared that his daughters had practiced the northern accent to better communicate with their guests. The girls are learning to drive, and they beamed as they shared their learner’s permits with the officials. Soon, they will visit college campuses and begin working toward their dream of becoming astronauts.

The next day, at a reception at Holt’s headquarters, the director of the Central Adoption Authority greeted the staff and shared the delegation’s goals for their visit. He shared about the accreditation process and acknowledged Holt’s work in Vietnam over the years. “We have a famous Vietnamese saying,” he said to our staff, smiling. “Seeing is believing.” When making a case for adoption, perhaps nothing is more powerful than the sight of children thriving in loving adoptive families. To see the Nguyen family is to believe that international adoption is a wonderful outcome for a child. And after seeing Mai, Ly, Trung and Thanh at home with their family on Sunday, Director Nguyen Van Binh could perhaps more confidently say to our staff on Monday: “We will make a great effort to promote adoptions for children who can’t find homes domestically in Vietnam.”

Thank you to Director Nguyen Van Binh, as well as Phan Dang Kien and Dang Tran Anh Tuan — both officials of the Central Adoption Authority — and Tran Quoc Toan, official of the Ministry of Public Security, for visiting Holt International in Eugene. 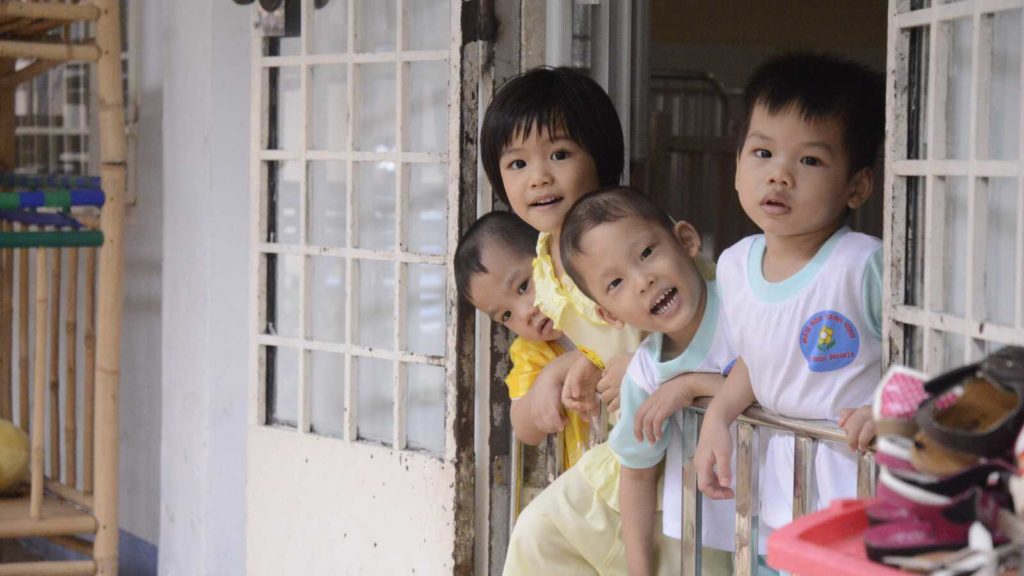 See how sponsors and donors create a brighter, more hopeful future for children and families in Vietnam!

Such great news! It would be awesome if adoptions resumed, especially through Holt. So nice seeing Thoa doing so good! We were fortunate to have her guide us through our adoption with Sophie – it would have been so great if those officials could meet her now!!

This is wonderful news for Holt. My husband and I are blessed to have our son, Luan, from Vietnam, and very proud of him and his work now in Vietnam.

We are so very excited! We look forward to Vietnam opening up again. I wish they could have met Hannah and Samuel, too!

Great New! So excited that some of the kiddos in Vietnam will be coming to their forever homes soon! Maybe by Christmas?
Waiting for the exciting news that you are selected 🙂

Seeing My Daughter Again for the First Time