Children with Down syndrome, like Jyn, always wait much longer to be adopted. But after eight years of waiting, a donor-funded Holt adoption grant helped unite her with her permanent, loving family — just before COVID-19 shut down China and the rest of the world.

When Sara Croasdaile traveled to China to adopt her son Cam, she already knew she’d come back.

Cam has Down syndrome and was 3 years old when Sara adopted him. To become the loving, permanent family to a child like Cam was something she had wanted to do her whole life.

“I say that I was called to adopt children with Down syndrome,” Sara says. And she doesn’t say this lightly.

Sara’s aunt had Down syndrome and passed away after heart surgery at just 3 years old. Although Sara never got to meet her aunt, she grew up in a family that was tightly connected to the Down syndrome community. Today, Sara works as a special education teacher, teaching and advocating for kids of varying abilities.

“I always said to myself, ‘One day!’” she says about adopting a child with Down syndrome. “And then my first child was born — and she was diagnosed with autism.” While Sara became a parent to a child with special needs in a different way than she expected, caring for her daughter only settled in her heart her conviction to adopt a child with Down syndrome — a developmental special need that is not as accepted and supported in some countries as it has increasingly become in the U.S.

“It never left my mind,” she says.

When her daughter turned 16, Sara started looking into international adoption. And when she saw Cam on Holt’s waiting child photolisting, he stole her heart. She went through the process, and in September 2018, as a single parent, Sara finally traveled to China to bring home her son.

Cam was just 3 years old and at first, a little unsure about Sara.

“But by the time we were back at the hotel that evening,” Sara says about the first day they met, “he decided that I was the one for him and we have been inseparable ever since. He is definitely a mama’s boy.”

But like a lot of adoptive parents, Sara was struck by the number of children in Cam’s orphanage in China who were still waiting, especially those like Cam. At the orphanage, she kept asking the staff, ‘What about the other children here with Down syndrome?’

‘Will you please help us advocate for this girl?’ the orphanage staff asked Sara, telling her that she’s very high functioning but she’s being passed over because she’s older.

Sara left China committed to help advocate for this girl, named Yibao, to find a family.

“That’s how it started,” Sara says. Today, as Sara shares her family’s story, you can hear 8-year-old Yibao, now called Jyn,  giggling in the background. She’s playing in a nook under the stairs of their townhouse, and just thinks it’s the best thing ever.

Once home in the U.S., Sara decided she didn’t want to advocate for Jyn to find a family. She wanted to adopt her, too.

“I live in California outside of L.A.,” Sara says. “As a single parent, I am the only breadwinner, and any savings I had were used [to adopt Cam]. I had nothing.”

While her finances posed a major hurdle, in all other ways Sara was more than equipped to parent another child with Down syndrome. She had experience, patience, compassion and love. She had access to medical resources and therapies her children would likely need. She could support three children financially once home. All she needed was a little help paying the fees and expenses to complete Jyn’s adoption. And for families like Sara’s, who are well equipped in every way to parent a child in need of a family, Holt never wants finances to stand in the way.

“The average cost of an adoption is an expense far beyond day-to-day care,” says Beth Smith, Holt’s director of services for China regional programs. “For someone like Sara, who is knowledgeable, successfully parenting a child with the same condition, and has all the resources — just not the financial resources — we were really trying to find a way to make it happen.”

Beth and Holt’s China team were dedicated to making this happen not only for Sara, but even more so for Jyn — who required extra homefinding advocacy  due to her age and special need.

“First, my car broke down, and it required about $1,500 in repairs,” Sara says. “Then, my daughter had some new medical issues crop up that we had to figure out. Then, my car broke down again! We were down to the wire.”

For a while, everything seemed against her — making it harder and harder to come up with the funds to cover Jyn’s adoption fees.

“For someone like Sara, who is knowledgeable, successfully parenting a child with the same condition, and has all the resources — just not the financial resources — we were really trying to find a way to make it happen.”

“As a single parent, paying the adoption fees on a single income is already difficult enough. But on top of that, single parents can’t apply for the majority of adoption grants available,” Sara says. “It really limits what’s available to us.”

Determined to adopt this girl who no one else had come forward to adopt, Sara exhausted every opportunity — applying for as many financial resources as she was eligible for. This included Holt’s Special Needs Adoption Fund (SNAF), now a part of the Families Not Finances campaign.

Designed to ensure that finances never stand between a loving family and a child who truly needs one, special needs grants are awarded to families who are in process of adopting children with special medical or developmental needs, older children or sibling groups — children whose unique needs make it more challenging to find the right families for them. Children like Cam and Jyn.

Both two- and one-parent families are eligible for these grants, which are funded by Holt’s generous donors. When Sara learned that she would receive one, it made all the difference.

“Literally, without Holt and the SNAF grant, Jyn wouldn’t be with me today,” she says.

The thought of this is scary for Sara, especially now. Jyn lived with a foster family in Wuhan, which is the epicenter of the new coronavirus outbreak.

“Because she has Down syndrome, she’s immune-compromised and more likely to get sick,” Sara says. “Her foster parents were much older, and the likelihood of her being sick in this mess right now is very likely.”

While no one could have known this medical danger at the time Sara was awarded the grant, without it, she believes Jyn would likely still be in China right now. The financial help from the grant helped Sara stay on track with her adoption expenses, and thus allowed her to bring Jyn home as soon as possible.

In the final months, Sara fought fiercely to bring her daughter home. And it was this tenacious love, as well as the generosity of Holt’s donors, that helped bring Jyn home.

Even apart from the current outbreak in China, Sara says that Jyn’s life in China would have been difficult if she wasn’t adopted. As a child — and someday an adult — with Down syndrome in China, Jyn would have had a very different kind of life.

“It’s not like it is here,” Sara says, referring to the support and resources available to people with special needs. “In China, they don’t have the opportunity for a future.” In an orphanage, there aren’t special education classrooms or developmental therapies or other resources that children with Down syndrome need to reach their full potential. She would also face stigma, and discrimination, because of this condition that she was born with.

Apart from Jyn getting her tonsils out and needing dental work, neither Jyn nor Cam have the complex medical issues that can be common for children with Down syndrome. But now that they’re home with Sara, they’re receiving the specialized interventions and education they need to help them grow and develop and become as independent as possible.

Jyn has already started school, in a special education classroom, and is loving it. She even has friends who speak Mandarin — although Sara says it’s been amazing how much English she has already learned. She now has the chance to be who she really is — exuberant and smart and a beloved daughter.

“I mean, [SNAF donors] essentially gave my daughter life. Without them, she wouldn’t have a life,” Sara says. “She’d live, but she’d have no chance at ever being independent, finding meaning in her life… They made that happen.”

Right now, Jyn is safely at home with her family. She narrates all of her actions across the house to her mom — she’s in the bathroom, she’s washing her hands, she’s talking to herself in the mirror. She shrieks with joy, communicating, “Mom, look at me!”  To which Sara responds as the loving and nurturing mother that Jyn has needed all along.

Although these tasks and conversations may seem like everyday life with kids, Sara knows that it’s extraordinary how far Jyn has come and how well she is doing. As a family, they are thriving.

“I never thought in a million years this is where I’d be, and I don’t want to be anywhere else,” Sara says. “And it’s thanks to Holt and SNAF donors — they brought me from start to finish for both of my children.” 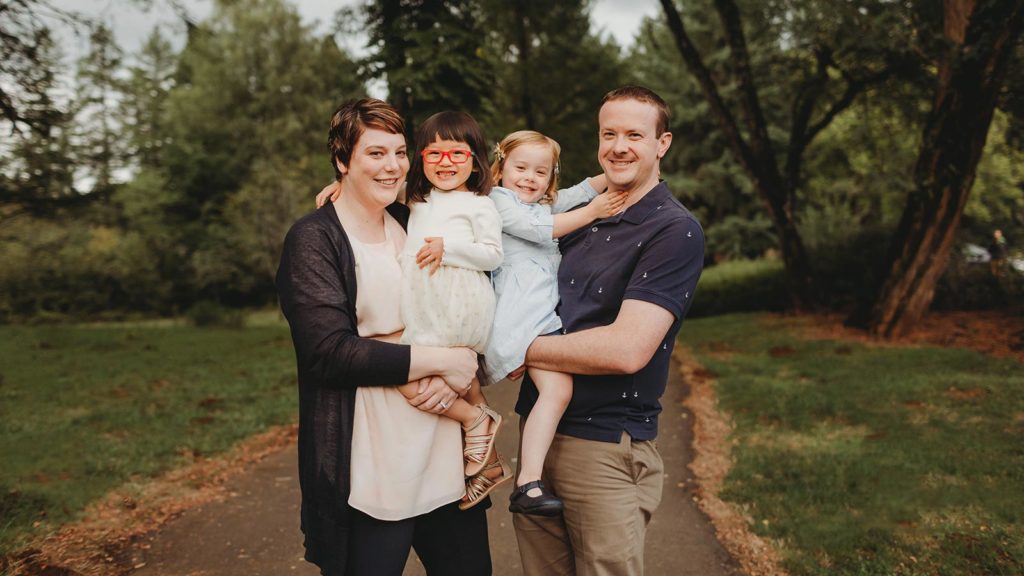 We are here to serve, connect and support all adoptive families! We offer post-adoption coaching and education, summer camps and more.

I always wondered who adopted these two kids. Thank you for sharing your story and theirs. I wish you all the best! They are great kids and you are a cherished mom.

The Least We Could Do

Get to know Chen